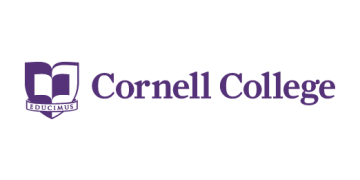 Cornell College, a private undergraduate liberal arts college, is seeking a “soft rock” geologist to serve as the third pillar of its geology faculty and to actively engage with the college’s environmental studies, biology, and archaeology programs. The position begins August 2023. Teaching responsibilities will include paleontology and sedimentology/stratigraphy, introductory and advanced level courses in subjects of the candidate’s primary interest, a research class, and a course in Geographic Information Systems. The successful candidate will be a vibrant and dedicated teacher who enjoys working closely with undergraduates and who views student-faculty research as a critical component of an effective geology curriculum. Cornell College geology faculty members emphasize class discussions, field and lab experiences, writing, quantitative literacy, and critical thinking in all of their courses.  A Ph.D. is required. Candidates with an ABD will be considered for a Lecturer appointment.

Because Cornell College values diversity and strives to create a welcoming community in which all individuals are respected and included, the entire campus community engages in dialogue around issues of difference, identity, and ideology. The college is committed to fostering a faculty and staff community that reflects our diverse student body. We encourage applications from candidates who share our vision for a campus that embraces differing backgrounds, viewpoints, and identities, and who will excel at teaching and mentoring a student body that is broadly diverse.  (See our diversity statement.)

All Cornell faculty are expected to participate in service to their department and to the college and to facilitate their department's support of the college's Ingenuity core curriculum. The college encourages interdisciplinary interests among its faculty and the development of teaching strategies that capitalize on our unique academic calendar. Our academic calendar allows us the freedom to take students off-campus without impinging on other course commitments. In addition, class size is limited to 25 students, and upper-level courses are often smaller. Full-time faculty teaching load is 6 OCAAT courses during the academic year with the other 2 blocks reserved for ongoing research projects, course preparations, or travel to academic meetings; further opportunities for summer teaching and research supervision may also be available.

Cornell College is a national liberal arts college committed to excellence in teaching and the creation of a welcoming community in which all individuals are respected and included. Our innovative curriculum includes a focus on the essential abilities of writing, quantitative reasoning, and intercultural literacy as well as experiential learning. Cornell’s One Course At A Time (OCAAT) academic calendar is divided into eight- 3½ week blocks in which students take and faculty teach a single course. This one-at-a-time approach fosters strong student engagement and close faculty-student relationships while allowing faculty freedom to design and carry out their classes, on campus or off.

Founded in 1853, Cornell’s distinctive campus community reflects our ongoing pursuit of our core values and continuing tradition of shared governance.  Always a coeducational institution, we were the first college west of the Mississippi to graduate both men and women and the first college in the country to afford a female faculty member the same title and pay as her male colleagues. Academic immersion, real world experience requirements through Ingenuity in Action, and unparalleled flexibility attract an ambitious student body from around the world. Three quarters of our students are from outside Iowa, representing 44 states and 13 foreign countries. Students of color comprise one-fifth of the student body.

The college is nestled among Silurian and Devonian carbonates, with numerous exposures available nearby for field trips. Cornell's picturesque hilltop campus contains a mix of historic and modern facilities, and the historic Norton Geology Center contains extensive paleontological and mineralogical collections, as well as teaching microscopes and a thin section lab.  Mount Vernon, Iowa, is a flourishing community with a vibrant arts scene, recognized by Frommer's as one of "America's Coolest Small Towns" and located in the heart of the Iowa City-Cedar Rapids technology corridor.

Applications will be reviewed beginning November 28, 2022, and continue until the position is filled.

For more information about the department, please visit the Geology department website.

Any questions can be directed to Emily Walsh, Department Chair and Professor of Geology at [email protected]

Cornell is an AA/EO employer and encourages applications from underrepresented groups. Cornell complies with Iowa's Smoke-free Air Act, participates in e-verify for verification of employment eligibility, and conducts background checks.