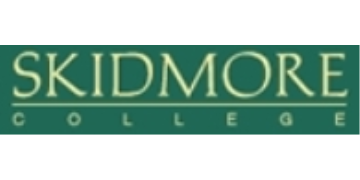 The Environmental Studies and Sciences (ESS) Program at Skidmore College is looking for an enterprising and passionate Post-Baccalaureate Fellow in Environmental Data . The selected Fellow will support faculty and students in data unification, analysis, and visualization while also pursuing their own collaborative independent research. A key goal of the Environmental Data Science Fellowship is to advance the Fellow’s professional, technical, teaching, and research capabilities in preparation for an advanced career in science. The Fellow will work collaboratively both within the ESS Program and across other departments and programs to help integrate environmental data science techniques into student-centered teaching and research at the College. In the Spring 2023 semester of this 1-year, non-renewable, fellowship the Fellow will give a public research seminar describing their experience and accomplishments.

The Fellow will report to PI Kris Covey, Assistant Professor, Environmental Studies and Sciences but is expected to serve the wider Skidmore community.

Skidmore is a highly selective liberal arts college with a reputation for its creative approaches to just about everything. With its relatively small size and student-faculty ratio, the College is a close-knit academic community. Skidmore is known for its faculty of teacher-scholars devoted to the instruction and mentoring of undergraduates—approximately 2,400 talented men and women from some 47 states and 46 countries.

A great education is all about putting academic theory and creative expression into practice. That’s what our founder, Lucy Skidmore Scribner, believed. Skidmore’s not an ivory tower. Never has been. Never will be. It’s a place where faculty and students work together, then figure out how to use what they’ve learned to make a difference in the world. This practical focus often leads to cross-disciplinary and interdisciplinary approaches, where students carry multiple majors, student-faculty research is common, and internships and community service are standard. It also leads to interesting and unusual combinations of activities, frequently woven into an intellectual passion.

If this kind of experience resonates with you, why not take a closer look at Skidmore?

Skidmore College is located in the historic resort community of Saratoga Springs, New York.  Set in the foothills of the Adirondack Mountains, Saratoga is located about 30 minutes north of Albany, the state capital.

Saratoga is a small, cosmopolitan city of 30,000, noted for its Victorian heritage, famed spas, and thoroughbred horse racing.  The Saratoga Performing Arts Center is a site of top rock, jazz, and pop performances as well as the summer home of the New York City Ballet and the Philadelphia Orchestra.  Saratoga is a three-and-one-half-hour drive, train ride, or bus trip from New York City, Boston, or Montreal.