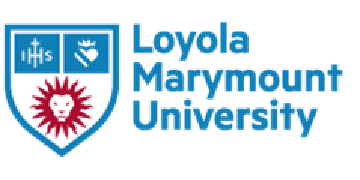 LMU generates more than $250 million annually in direct economic activity in Southern California and employs more than 2,240 people. Students volunteer more than 175,000 service hours a year with 350 community organizations. LMU was named a 2007 “Treasure of Los Angeles.” Many programs, including the Leavey Center for the Study of Los Angeles, the Bioethics Institute, the School of Education and the Dept. of Natural Science, make L.A.’s politics, healthcare, education and environment part of the curriculum. Loyola Law School is the first ABA-accredited law school in California with a mandatory pro bono requirement.

At Loyola Marymount University, diversity is fundamental to our mission and identity. But, a diverse campus takes time to develop and flourish. It is a work in progress that involves each and every one of us: student, faculty, and staff.

LMU must be a place where people feel free to say what they think and where they also listen with respect to what others say -- not simply in the classroom but also in residence halls and dining rooms, in staff and faculty meetings, and whenever two people talk on the bluff. Through speaking and listening, we probe diversity, work though the challenges it poses, and reveal the richness of its promise.

With sweeping vistas of downtown Los Angeles and the Pacific Ocean, Loyola Marymount University is situated in one of the most dynamic and diverse cities in the world. Los Angeles is the second largest city in the United States, with an estimated population of 4 million. Residential development is booming, cultural institutions are multiplying, and retail and entertainment options are thriving on an unprecedented scale. LMU students and faculty take all that Los Angeles has to offer, and use it as a laboratory for understanding the complexity of cultures, industries, images, and opportunities that Southern California embraces.

Get job alerts from Loyola Marymount University straight to your inbox